The Battle Lions took the lead twice, but were unable to hold on against the visiting Armada.

Tallahassee Soccer Club began their 2022 regular season campaign hosting Jacksonville Armada FC U-23 on Saturday April 30, 2022 at Gene Cox Stadium. The Battle Lions earned a point against the South Region powerhouse in a 2-2 draw. It was a hard fought point in a back and forth match with Tallahassee taking the lead twice before settling for the draw.

Coach Joshua Bruno employed a 4-4-2 formation against the opponents. 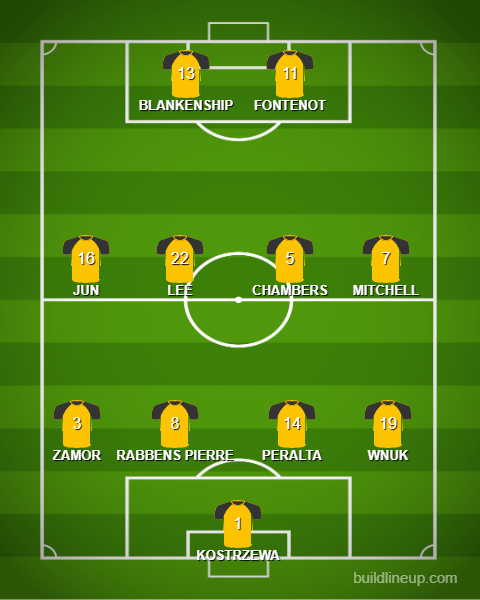 Both clubs came out looking to establish a rhythm and the result was an even back and forth first 20 minutes. The Armada got the first shot of the match  in the third minute of play but Cameron Kostrzewa made an easy save.The Battle Lions began to assert themselves, and did a good job of pressing the Armada in the midfield. The no fear approach checked the visitors limiting their chances in the first part of the half.

The two teams went back and forth until the 13th minute. Tallahassee cleared the ball up to Charles Blankenship who took one touch to settle the ball, and one touch to put the ball through to Sy Fontenot. The Armada keeper was caught outside of his box, and Fontenot deftly chipped him to score the first goal of the match and the season for the Battle Lions.

Following the Tallahassee goal, Jacksonville started to push forward with more intensity, earning corners and free kicks, though they were not able to convert any chances. The Battle Lions were still able to get into the attack on occasion, but were not able to create any real threats.

Jacksonville’s Alexandros Lerides tried to draw a penalty in the 31st minute, but the attacker had gone down too easily for the referee. Jacksonville’s best chance came seconds later when Eduardo Coimbra put a well placed header on target, but Kostrzewa came up with the save.

After that the Battle Lions tried to break through on a counter attack, but Fontenot wasn’t able to break through three Armada defenders. From that point, Tallahassee was defending non-stop as Jacksonville threw everything they could at the Battle Lions defense. At the half, Jacksonville had the better share of chances, but Tallahassee had the lead.

The second half started much the same as the first with the teams each trying to get on the front foot. Tallahassee earned the first corner of the second half, but wasn’t able to convert. Jacksonville went on the counter and earned a corner of their own, but it was over-cooked, and out for a goal kick.

Tallahassee kept up the pressing mentality, but it was Jacksonville scoring first in the second half. In the 55th minute, Jacksonville’s Eduardo Coimbra took a throw-in, turned towards goal, created some space and put in a powerful left-footed shot past Kostrzewa for the equalizer.

It didn’t take Tallahassee long to retake the lead. Christian Wnuk won the ball on the right side, and pushed it forward to Ryan Duant who came on in the 63rd minute. Duant got a step on his defender, centered it back to Wnuk, who dropped it back for Joseph Grave de Peralta to put a perfectly placed shot into the upper left corner, putting the Battles Lions back on top 2-1 in the 64th minute.

Tragedy almost struck in the 68th minute when San Rabbens Pierre tried to clear the ball with his head, but it went straight towards his own goal. Fortunately, Kostrzewa was able to palm it over the crossbar to keep the lead for the moment. Jacksonville earned a free kick on a foul by Adrian Perez, but the wall kept it out.

Kostrzewa had another big save in the 72nd minute and a Jacksonville cross bounced around the area, and the following sitter went over the bar. Unfortunately, the Armada earned a penalty kick in the 76th minute, and Alexandro Ierides converted the chance to draw the Armada even.

Tallahassee nearly had the winner in the 79th minute on a cross from Duant into Fontenot, but his header went just wide of the right post. Jacksonville also had a chance on a header but the Armada were unable to convert.

With the draw Tallahassee earned their first point and went to 0-0-1 on the season. The Battle Lions next take on the Florida Roots Saturday, May 7 in Panama City.